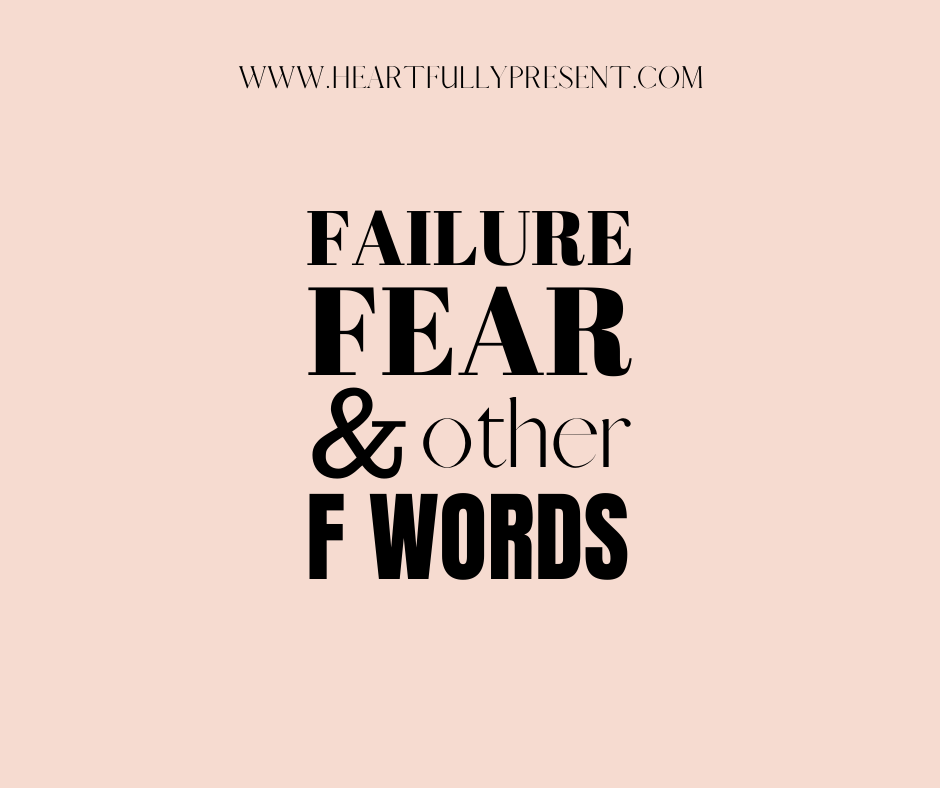 Fear is real, and it’s universal.  Everyone feels it.  But before I get to fear let’s talk about failure.

I made a really bad judgment call at our family retreat this week.  I grabbed onto a rope swing, got a running start, took a flying leap, lost my grip, and landed hard face down in what could have been a really terrible accident.  (By miracle alone, my head is fine… but my ribs and my neck are not.  I’m propped up like Frankenstein just to write this.  Nothing a few days’ rest and ibuprofen can’t handle.)

No big deal, really; just a dumb lack of common sense.  The rope isn’t even rated to hold my weight anyway.  Furthermore I could have broken the tree branch if I had actually gotten off the ground.

As we were making breakfast the next morning, I did something else goofy and asked Jack, “do you ever catch yourself mid-action and think, this was a really bad idea?”

He of course said no (teasing me) and asked if I do that.  I answered yes, about 9 million times a day.

This is a slight exaggeration but it holds truth.

How many times do I act without thinking, move without planning, speak without filtering?  Only to look back immediately and cringe, “GOSH, I wish I would’ve…”

Some of this is just how we learn.  We are all hopelessly flawed and ever-evolving.  Every mishap is an opportunity to learn and be better next time.  If you’re not failing, if you’re not even in the arena to begin with, you’re not growing at all.

The credit belongs to the man who is actually in the arena, whose face is marred by dust and sweat and blood; who strives valiantly; who errs, who comes short again and again, because there is no effort without error and shortcoming; but who does actually strive to do the deeds; who knows great enthusiasms, the great devotions; who spends himself in a worthy cause; who at the best knows in the end the triumph of high achievement, and who at the worst, if he fails, at least fails daring greatly, so that his place shall never be with those cold and timid souls who neither know victory nor defeat.” – Theodore Roosevelt, “Citizens in a Republic” speech, 1910

EVERY BIT of my marriage is this – dust and sweat and blood, falling short, striving for a worthy cause, enthusiasm, devotion, moments of triumph and failure, and most importantly daring greatly to grow a marriage that models love, forgiveness, boundaries, strength, and humility to my children.

The “man in the arena” reminds me of this scripture too: “I know your deeds, that you are neither cold nor hot.  I wish you were either one or the other!  So, because you are lukewarm – neither hot nor cold – I am about to spit you out of my mouth.” – Revelation 3: 15-16

The scripture is a specific calling upon our spiritual lives.  But I love the imagery and it’s a great reminder to never get complacent.  “Good enough” or “fine” (or in my tendency “coasting”) is not where we’re meant to stay.

We’re meant to care.  To act.  To move.  To stay awake, alert, ambitious, and focused on growth.

The crazy paradox about ambitious goals is that we’re also called to be still… be content… rest in the knowledge that we are enough just as we are.  Is anyone else as confused as I am by all this?  The tug-of-war between staying content and striving for more breaks my entrepreneurial-Jesus-girl brain a little.  I really do think we need both, in equal parts, in order to become our best without losing our marbles in the process.

The short version?  Growth = Pain. (So sayeth my neck and ribs.)

So too sayeth my marriage, my parenting, my professional business, my bank account, my waistline, and my actual self.

But because fear shows up the moment I have an opportunity to grow, it’s easy to disguise that fear of growth and change as “contentment.”

I love my life.  We have all we need.  Why rock the boat?  Why strive for more?

Because I am capable of more.  Because we are meant for more.  Because God is counting on the living instruments he placed on the earth and I want to be a useful one.

Does that mean every leap of faith will be rewarded with a victory story?  Nope.  Most big leaps involve at least one painful face plant.  Probably many, actually.

It’s easy to dismiss that failure, that pain, as “a sign it’s not meant to be.”

What if we’re wrong about that?

What if the failure is the invitation to keep on keepin’ on?  Only smarter this time?

It’s nearly impossible to embrace that kind of bold resilience in the moment.  For example, my first thought face down on the ground, after “I hope I don’t have a concussion” was “NEVER AGAIN.”

Now that’s fair, on many levels.  The rope wasn’t strong enough, and neither was the branch.  I didn’t go in with careful thought or any kind of backup plan.  I was doomed to fail, actually.

I think what helps me make the shift from “wish I wouldn’t have done that” to “I’ll do better next time” is what I choose to do after I blow it.

I have two choices: wallow in the setback, or learn from it to be better next time.

If we wallow in failure, we’ll stay stuck forever in a murky swamp of regret, pain, embarrassment, shame, fear, and even more scarily intense feelings like anger and depression.  Wallowing requires no action at all.  That’s Door Number 1.

But behind Door Number 2 is the choice to learn and do better next time.  This also involves pain, embarrassment, and a bunch of crappy fear too.  But the difference here is that learning uses those negative emotions as motivation OUT of where we landed.  This choice requires action.  It’s harder.  Which is why lots of people are scared to do it.

Fear is real… but it’s not your master

If I had to boil down the near-death of our marriage to one thing, I would say it was FEAR.

Fear of a fight.  Fear of feeling unheard.  Fear of realizing our problem was bigger than I imagined.  Fear the problem was too big for us to fix.  Fear I wasn’t who I wanted to be.  Fear he’d never change.

All those fears were valid – little red flags trying to get my attention and spur me into action.  Yet tragically, because I didn’t grab those fears by the horns and wrestle them down, they bypassed me altogether and invited my worst fear to come out to play instead – the destruction of my marriage and family.

In the initial aftermath, I sobbed over and over that I DID speak up, I DID voice concerns, I DID put the issues on the table.  (I did.  Not well enough, but I did.  If you feel misunderstood, it is your job to say it again or say it different or say it louder or throw something to get their attention.  You can be mad about this truth or you can actually try it.  For help with this, click here.)

But here’s my half-hearted and chicken plan to fix my marriage failed: at the first hints of discord and discomfort between us, I retreated.  I let fear back me into a corner and devour my confidence and trust down to the bones.  So in this way the problems in our marriage grew, and with them, my resentment and anger too.

Want to know what happens to people whose fear and anger are high, and trust and confidence are low?

They self destruct.  Their lives fall completely apart, starting with their most important relationships.  I nearly ran a thriving business into the ground and almost ripped my family in half.  And it wasn’t just my fault.  It takes two to destroy a marriage.  Imagine two people simultaneously self-destructing – that was our home three years ago.

It’s all good – we both got our $%&# together and rebuilt it all from the smoking ashes up.  I love the way all our broken pieces fused back together, stronger than before.

The upside to failure (i.e. telling fear to shove it)

Here’s the marvelous thing about failure – when you stare it in the face and defiantly flip fear the bird, that thing you failed at never seems quite so scary again.

Honest truth: I do have lingering hints of fear and mistrust that we (me as an individual and him as an individual and we as a couple) will revert back into old patterns of poor communication, disregard for each other’s feelings, and tendency to turn a blind eye to those little red flags.  We’re far from perfect, and 17 years of bad habits take intentional work to change.  I also have to remember that we cut each other the deepest wounds with the sharpest swords, and that pain takes time to heal too.

A marriage can survive an affair, or any other awful crisis.  But the reason most marriages don’t survive is because both parties are so hurt, angry, and defeated that they can’t even begin to heal all the problems that led up to the affair/crisis in the first place.  (This is my non-certified yet 100% experiential theory and I’m sticking to it.)

It’s not all rainbows over here.

But I’m not afraid to try again.

PS: My first book is coming in just a few weeks!  Hop onto our Happy Mail Club list (click the button just below here to subscribe) for updates and sneak-peeks, including how to grab a copy of Joy Comes in the Mourning before it launches, and how we’re using this little book to make a difference for marriages and families all over the world.